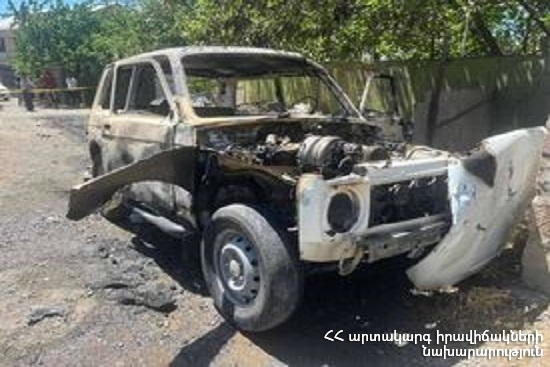 On June 23, at 11:07 an emergency call was received to Crisis Management National Center that explosion with fire had occurred on Getapnya Street in Parakar village of Armavir Province: there was a blocked citizen.

One fire unit from the Fire and Rescue Squad of Yerevan Rescue Department, the operative groups from the Center for Carrying out Activities of Special Importance and Crisis Management National Center of the Rescue Service of the MES of RA dispatched to the scene.

It turned out that an explosion with fire occurred in “VAZ-2121” car (driver V․ B․ born in 1986) near a house on Getapnya Street: the car crashed into the wall of the garage nearby the house.

Before the rescuers arrived at the scene the driver had been hospitalized in “Astghik” MC, where the death of the casualty was registered.