As a result of the war, about 91,000 people were deported to Armenia, 88% women and children. MP at PACE session 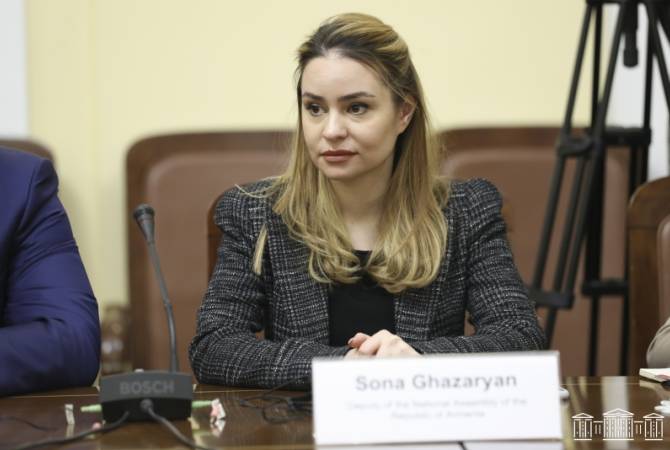 YEREVAN, JUNE 23, ARMENPRESS. Sona Ghazaryan, a member of the “Civil Contract” faction of the National Assembly of Armenia, stated at the PACE plenary session that more than 91,000 people, 88% of whom are women and children, were deported to Armenia as a result of the war unleashed by Azerbaijan in 2020.

ARMENPRESS reports, the National Assembly published the text of the MP’s speech, which runs as follows,

“At the beginning of the 20th century, the movement for women’s right to vote was spreading worldwide, and I am very proud to say that Armenia already was having success. In 1919 the first direct parliamentary elections were held under universal suffrage – every person over the age of 20 had the right to vote regardless of gender, ethnicity or religious beliefs. Three women deputies: Katarine Zalyan-Manukyan, Perchuhi Partizpanyan- Barseghyan and Varvara Sahakyan were in the Parliament and maybe you recognize the grandchild of Perchuhi Barseghyan, Jeanne Barseghyan, who is currently the Mayor of Strasbourg.

Diana Abgar, another Armenian strong woman took a different path to public life. On July 2, 1920, she was appointed Armenia’s envoy to Japan. Serving until 1921, she ranked as one of the world’s first female ambassadors.

Nowadays at the current Parliament women representation is higher than ever but still not enough, 35%. Highly appreciating the role of women in the civil society organizations, we are actively engaged with them in the law-making process that will lead to even more female participation in the legislative bodies.

Having peace as one of the main agendas for the ruling party, I can assure that female MPs are also engaged in the decision-making processes.

The Republic of Armenia has also developed the Second National Action Plan on the implementation of the United Nations Security Council Resolution 1325, reaffirming its readiness to continue its work on women, peace and security.

The program addresses the issues and challenges faced by the women displaced from Nagorno Karabakh as a result of the aggressive war unleashed by Azerbaijan against Artsakh in the fall of 2020.

As a result of the aggressive war, more than 91.000 people were forcibly displaced and received asylum in Armenia, 88% of whom were women and children.

The aggressive war started during the COVID-19 epidemic, thus complicating the difficult situation for women and girls. Thus, the program presents the problems of women and girls in crisis, addressing their security component. The program addresses the issues of forcibly displaced women, the security challenges posed by the new border situation, and their impact on women and girls.

Having thus said, I need to be sincere that I am really surprised to hear how our female colleagues here at the PACE and other high level female officials in the neighboring countries can speak in support of war and violence, finding justifications”.

Armenia reaffirms its readiness to establish peace, stability in the region