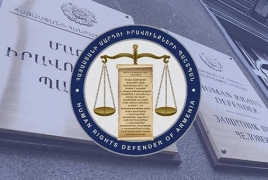 Grigoryan made the remarks during the interactive dialogue with Special Rapporteur on summary executions within the 50th regular session of the UN Human Rights Council.

During the dialogue, in her statement the Defender highly appreciated the work of the Special Rapporteur on extrajudicial, summary or arbitrary executions stressing the need for further strengthening the mandate and allocating more resources.

“The Defender reflected on the response to torture, extrajudicial and summary executions of Armenian civilian captives and PoW during and after the 2020 hostilities in Nagorno-Karabakh, which has been inadequate, and insufficient to say the least creating preconditions for extrajudicial and arbitrary executions in other ongoing conflicts,” her office said in a statement.

“Summing-up the Speech, as a guarantee of effective implementation of the mandate the Defender stressed the imperative of visiting the regions and territories more by Special Rapporteur emphasizing the need for better understanding on the ground.

“Highlighting the role of national human rights institutions as a valuable partner to the Special Rapporteur, Defender Grigoryan expressed her willingness for partnership.”

Armenia to face Azerbaijan in Chess Olympiad Round 10

Armenia is responsible for Artsakh