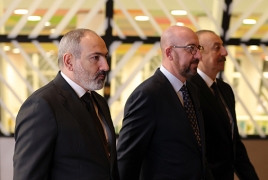 “Working together to ensure de-escalation and open connections,” Michel said in a tweet.

“Ahead of our next meeting of leaders in Brussels, pursuing dialogue and achieving concrete progress on all items on the agenda is key. The EU remains committed.”

The South Caucasus and the “Great Game” of Energy Security