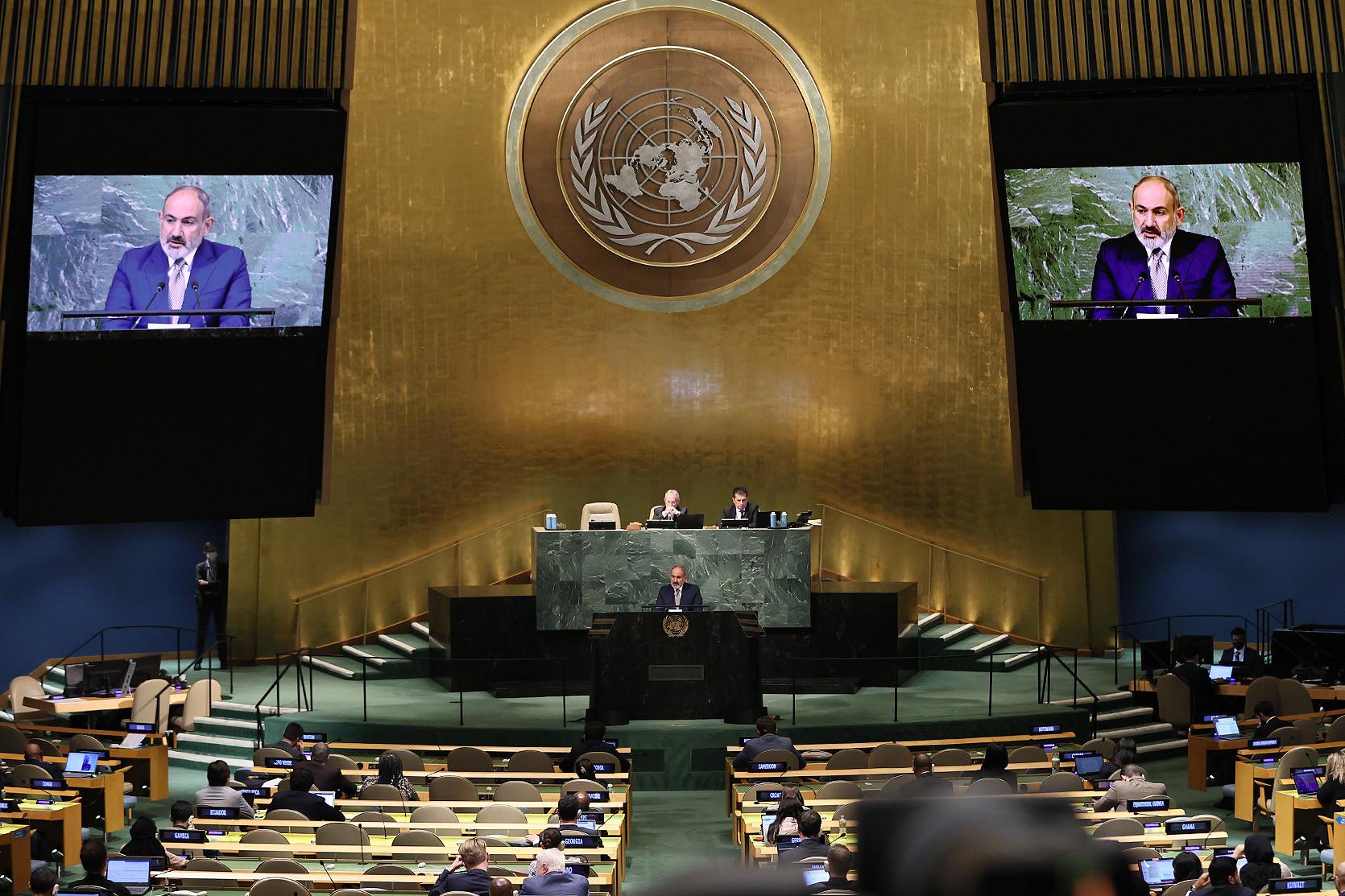 As part of his working visit to New York, Prime Minister Nikol Pashinyan delivered a speech at the 77th session of the UN General Assembly at the UN headquarters.

Below is the full speech of the Prime Minister of Armenia.

It is an honor to return to the General Assembly, though I wish I was here with a more positive message, given all the challenges and tribulations the world has been through in the past few years.
But my statement will focus on the latest Azerbaijani unprovoked aggression against the sovereign territory of the Republic of Armenia and its overall impact on the stability in the South Caucasus.

On September 13, Azerbaijan launched an unprovoked and unjustified military aggression against Armenia. Using heavy artillery, Multiple Rocket Launchers and combat UAVs, the Azerbaijani armed forces shelled 36 residential areas and communities, including towns of Goris, Jermuk, Vardenis, Kapan, Geghamasar deep within the sovereign territory of Armenia. This was not a border clash. It was a direct, undeniable attack against the sovereignty and the territorial integrity of Armenia, which was condemned and addressed during the latest UN Security Council meetings and beyond.

The Azerbaijani attack deliberately targeted civilian population and vital civilian infrastructures: Jermuk is one of the main health tourism and resort places of Armenia and now as a result of Azerbaijani aggression all the hotels, resort and health centers of Jermuk are closed. All the residents of this town are displaced. Overall number of those temporarily displaced from Gegharkunik, Vayots Dzor, and Syunik regions of Armenia is more than 7600 persons, mostly women and elderly people, among them 1437 children and 99 persons with disabilities.

Around 192 houses, 3 hotels, 2 schools, 1 medical facility, 1 medical facility, partially or completely destroyed. 7 electrical infrastructures, 5 water infrastructures, 3 gas pipelines, 1 bridge were damaged. 2 ambulances, 4 private cars were shelled. The Kechut water reservoir was targeted and shelled. Journalists and ambulance vehicles were targeted and shelled as well.
As a result of the aggression, the number of victims and missing persons at the moment exceeded 207, among them 3 civilians were killed and 2 civilians are missing. 293 servicemen and 8 civilians were wounded, at least 20 servicemen were captured. There are evidences of cases of torture, mutilation of captured or already dead servicemen, numerous instances of extra-judicial killings, and ill-treatment of Armenian prisoners of war, as well as humiliating treatment of the bodies. The dead bodies of Armenian female military personnel were mutilated and then “proudly” video-recorded with particular cruelty by the Azerbaijani servicemen. The videos featuring such gruesome war crimes and crimes against humanity are being shared and praised on Azerbaijani social media by individual users.

No doubt, committing such unspeakable atrocities is a direct result of decades long policy of implanting anti-Armenian hatred and animosity in the Azerbaijani society by the political leadership.

In the wake of this offensive, the official narrative and other sources of information suggest that Azerbaijan intends to occupy more territories of Armenia, which needs to be prevented. I want to stress that the risk of new aggression by Azerbaijan remains very high, especially taking into account that every day Azerbaijan violates the ceasefire, and the number of causalities and those injured could change any moment. Another factor for further escalation can be inappropriate reaction to this situation by the regional security organizations, which raised very hard questions among Armenian society.

Despite the above-mentioned facts Azerbaijan is trying to pose itself as a country seeking peace in our region, peace with Armenia. Hearing from aside what Azerbaijan is saying, you can even be impressed by its devotion to peace efforts. And for staging this impression Azerbaijan is using the subjects of Peace treaty with Armenia, border delimitation, and regional communication opening agenda.

Why we have no tangible progress in these directions. The reason is very simple. Azerbaijan is using all those topics for territorial claims against Armenia. For example – one of the most important subjects of peace treaty is bilateral recognition of territorial integrity between Armenia and Azerbaijan. We have already declared that we are ready to do so, but Azerbaijan hasn’t done it so far. On the contrary, Azerbaijan has been publicly voicing that the entire South and East of Armenia and even the capital city of Yerevan, is an Azerbaijani land. On the other hand, Azerbaijan is keeping under occupation tangible territories of Armenia, and as I said the risk of new aggression by Azerbaijan remains very high.

In this regard I’m posing an official and public question to the Azerbaijani president. Could you show the map of Armenia, that you recognize or are ready to recognize as the Republic of Armenia? Why I’m asking this. Because it can come out that from the point of view of official Azerbaijan only half of Armenia and even less – is the Republic of Armenia. If Azerbaijan would recognize territorial integrity of Armenia, not theoretically, but concretely, I mean the integrity of our internationally recognized territory of 29.800 square kilometers, it would mean that we can sign peace treaty by mutually recognizing each other’s territorial integrity. Otherwise, we would have a phantom peace treaty and after that Azerbaijan will use border delimitation process for new territorial claims and occupation.

As you may know bilateral commission of border delimitation and border security was formed in May and two meetings of the commission have taken place. Before the formation of the commission, last year Azerbaijan occupied more than 40 square kilometer territories of Armenia. And then, one of the excuses of Azerbaijan about the reasons they have done this – was that Armenia, according to them, refuses to form border delimitation commission. Of course we didn’t refuse to do that but only insisted that simultaneously a mechanism of border security should be established.

In the end, according to our international partners’ request, who argued that the border commission work itself will be a reliable factor for border security, we agreed to start the work. And now that border delimitation and security commission has been formed and is working, Azerbaijan initiated a new phase of aggression. And some of those international partners are silent. But what is now the explanation for aggression of Azerbaijan. You know, if someone has excess of aggressiveness the reason always will be there. As it is said in a movie it is always possible to find a reason. For example, why they killed prince Hamlet. Who killed, how, when and why – it doesn’t matter. The reality is that Azerbaijan is trying and will continue to use delimitation process for territorial claims against Armenia.

Another such a topic is the opening of regional transport communication links. Azerbaijan is trying to represent Armenia as a destructive side in this discussion. The reality is, that Armenia is ready to open its roads for Azerbaijan in the framework of our national legislation. Moreover, recently the draft decision of government was published, that supposes to open three check points in the border with Azerbaijan for implementation of the article 9 of the trilateral statement from November 9, 2020. According to that draft, citizens and goods of Azerbaijan would be eligible to use the existing roads of Armenia to commute from main Azerbaijan to the Nakhchivan Autonomous Republic. The Armenian government had political will to unilaterally accept that decision. But Azerbaijani officials tell us, that they don’t want to have those routes. What do they want? They want a new route to be constructed. It is also acceptable for Armenia, but according to the 9th article of the trilateral statement from November 9, 2020, a new route can be constructed with the consent of the sides. Armenia is ready to construct such a route which would operate according to the legislation and within sovereign control of the Republic of Armenia.

So what is the point of Azerbaijani claims? Azerbaijan is hinting that Armenia has to provide an extraterritorial corridor and according to them the 9th article of the trilateral statement from November 9, 2020 is supposed to do that. The trilateral statement is a public document and in the 9th article there is nothing about corridor, extraterritoriality etc. So what is the purpose of Azerbaijan? To create a new crisis as a pretext for a new aggression against Armenia and for a new territorial claim.

We have shared packages of proposals with Azerbaijan on the topic of opening communications, and if Azerbaijan accepts that those routes must operate according to national legislations, we can decide on this very quickly.

As for the corridor wording, it is very important to note that in the trilateral statement from November 9, only one corridor is mentioned, and it is the Lachin corridor for Nagorno-Karabakh.

One of the crucial factors of regional stability is the comprehensive settlement of the Nagorno-Karabakh conflict where the rights and the security of the Armenians living in NK will be addressed and guaranteed.

Latest aggression is happening while the humanitarian consequences of the 2020 war in Nagorno-Karabakh have not been addressed yet. The post-war rehabilitation of Nagorno-Karabakh, the psycho-social issues of the displaced population, the repatriation of Armenian POW’s and the preservation of cultural and religious heritage remain on the agenda of our Government.

Nevertheless, the Armenians in Nagorno-Karabakh are in need of the support of the international community. We call to support the secure and unhindered access of UN humanitarian agencies to Nagorno-Karabakh in order to assess the humanitarian, human rights situation and ensure protection of cultural heritage on the ground. We think that the Office of the UN High Commissioner for Refugees and the independent fact-finding mission of UNESCO should have access to the Nagorno-Karabakh conflict zone.

Unfortunately, Azerbaijan has been blocking both missions by making artificial, political preconditions, essentially blocking the access of an independent fact-finding mission in Nagorno-Karabakh.

It is also reprehensible that Azerbaijan stalls the repatriation of Armenian Prisoners of War, inter alia subjecting them to artificial trials in gross violation of international humanitarian law, its own commitments, and contrary to the calls of the international community.

Sustainable regional peace and stability is our objective. Last year through democratic snap elections our people strongly supported the peace agenda of the Government and re-confirmed the commitment of Armenia to pursue the democratic path.

It is very important to state that the target of Azerbaijani attacks isn’t only the independence,
sovereignty and territorial integrity of Armenia, but democracy of Armenia too. Despite the expectation of some forces Armenia stayed democratic after devastating war of 2020, using the tool of free fair and democratic elections as a way out from internal political crisis. International community unanimously recognized and praised this fact.

The Armenian democracy is struggling in an atmosphere, when Azerbaijan is using force every day, to impose its plans unilaterally, to bring to the end the Armenian statehood, independence and democracy.

But I’m here to announce that we are determined to defend our democracy, independence, sovereignty and territorial integrity by all means. I want to underscore that diplomatic solutions are an absolute priority for us and the full engagement and support of international community is crucial. In this regard I would like to mention, that the international observation mission to the Armenia-Azerbaijan bordering areas would be an important factor for regional stability.

Undeniably, in the interests of regional stability and in accordance with norms and principles of international law Azerbaijani military forces must be withdrawn from the sovereign territory of the Republic of Armenia.

Ladies and gentlemen, I want to stress again: we are determined to build peace in our region, but we need the full support of international community, which will stand by the sovereign and democratic country and people subjected to aggression against the norms and principles of international law.

I believe in the potential of establishing long-term stability, security and peace and Armenia is committed to continuing diplomatic efforts to this end.

Thank you for your attention”.