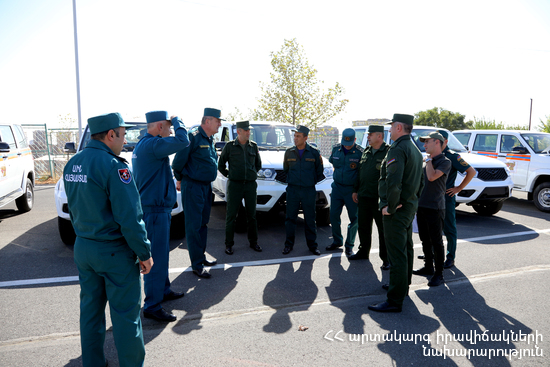 Six rescue departments of the Ministry of Emergency Situations were replenished with new “UAZ Patriot” vehicles. The vehicles were purchased with a part of the 1.2 billion drams allocated to MES by the Government in July, 2022. A part of the allocation was provided to improve, repair and reconstruct the buildings of different subdivisions of the Department.

Overall 19 new vehicles will be purchased, out of which 8 are going to be regular, 11 with pickup body. 6 of the purchased 8 vehicles were distributed to the regional rescue departments of Armavir, Aragatsotn, Shirak, Kotayk, Lori and Vayots Dzor. The vehicles were handed to Heads of the departments at the parade ground under the leadership of Deputy Directors of the Rescue Service Tigran Petrosyan and Karapet Manukyan.

In the provinces mentioned above “UAZ Patriot”-s will be used instead of the fire trucks that were serving the emergency calls of household cases. Replenishment of the regional subdivisions will be continuous.