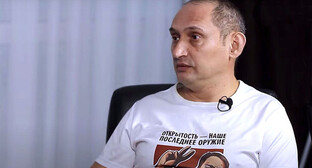 After conducting a check, the Investigating Committee of the Russian Federation (ICRF) refused to initiate a criminal case against the Krasnodar activist Vitaly Votanovsky for discrediting the Russian Army.

The “Caucasian Knot” has reported that Votanovsky was detained on February 24, 2022, at a pacifist action in Krasnodar. The court found him guilty of holding a public event and sentenced him to 20 days of arrest. On March 30, the activist’s home was searched, after which law enforcers drew up a protocol against him on discrediting the Russian Army.

The reason for the protocol was the pacifist slogan placed on the avatar of Votanovsky’s Telegram channel and on the activist’s jacket. “Also, when I was returning from the detention centre after my 20-day arrest, they took my photo in the jacket with inscriptions [about Putin and against the special operation in Ukraine],” Vitaly has added.

The ICRF has returned the material (protocol) to the police, having found no signs of criminal offense in it, Alexei Avanesyan, Votanovsky’s advocate, has informed.

Let us remind you that on September 16, Vitaly Votanovsky and Victor Chirikov, another activist, were detained after filming, in the town of Tikhoretsk, the graves of the soldiers who perished in Ukraine. On the same day they were released from the police, but then the court informed Votanovsky about the upcoming hearing on his case of participation in an undesirable organization.

On October 6, it became known that Votanovsky was fined for reposting the Bellingcat**. The court declared the repost as “collaboration with an undesirable organization.”

This article was originally published on the Russian page of 24/7 Internet agency ‘Caucasian Knot’ on November 23, 2022 at 01:16 pm MSK. To access the full text of the article, click here.