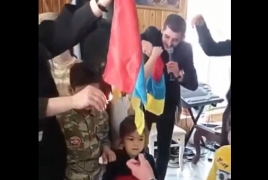 PanARMENIAN.Net – At least 2 Armenian flags were burnt at an Azerbaijani kindergarten recently, according to a video spreading on social media.

A man and a woman are seen setting fire to the flags at what appears to be a gathering of some sort, while small children are standing at close proximity, some of them trying to touch the fire.

Azerbaijani schools, kindergartens and other public and educational facilities have a practice of burning Armenian flags. However, they often set fire to flags of other countries that look similar to the Armenian one.