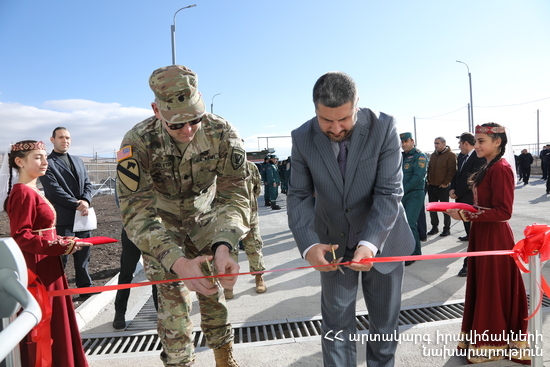 The newly constructed building of N52 fire-rescue squad has been put into operation in the community of Ashtosk in Shirak Province.

“I sincerely hope that the friendly collaboration between us will be continuous and we can surely state that in recent years there has been recorded a continuous progress and development in the cooperation between the Ministry of Emergency Situations and the US Embassy in Armenia, raising it to a qualitatively new level. Dear Mr. Singleton, you can be sure that the kind assistance of your Government is fully addressed and once again I express my gratitude to you, the American Government, as well as to our American partners for efficient cooperation in the sphere of emergency situations”, – stated Minister A. Pambukhchyan in his speech.

The construction works were carried out with the support from the United States European Command, the Military Cooperation Office of the US Embassy in Armenia, as well as the Ministry of Emergency Situations.

“I greet you all on behalf of the US Embassy and the US European Command. It is a great honor for me to be present here today, at the inauguration of the new building of the fire-rescue squad. This is a reflection of the expansion of the scope of cooperation between the governments of Armenia and the United States in the field of security. I am glad that the Ministry of Emergency Situations now has a greater opportunity to ensure the safety of the residents of this community,” said Lt. Col. Daniel Singleton in his turn.

The construction works launched in 2021. The building of about 700 square meters area was completely reconstructed: the territory was provided by the municipality. The squad is provided with all the necessary equipment and communal facilities.